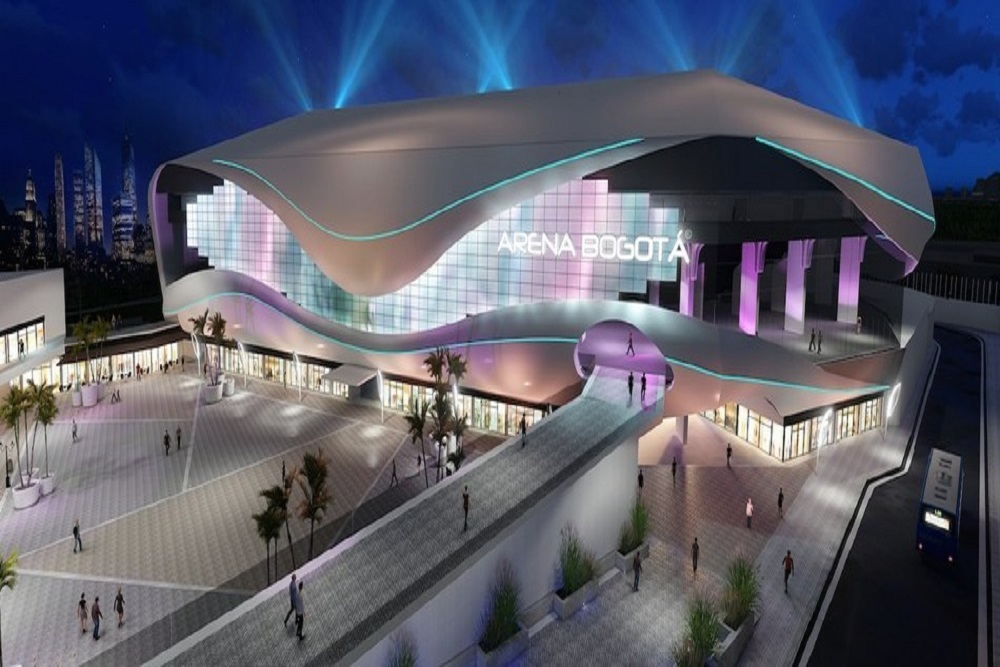 Henry Cardenas, the American businessman, president and executive director of Cardenas Marketing Network (CMN), and now director of Cardenas Entertainment and Marketing Group (CEMG), returns to his native country, Colombia, to fulfill his professional dream of being the owner and operator of Arena Bogotá, an enclosed venue, which is destined to become an iconic venue that will showcase world-class events.

Arena Bogotá is currently being constructed on Calle 80, allowing the arena to serve as the destination spot for the Colombian capital to converge at a series of events, including: live music performances, business conventions, and sporting events. The mega-structure, which surely will become a must-see cultural and entertainment center in the region, occupies a plot of land that exceeds over 1,000,000 square feet, and ultimately will include construction on over 750,000 square feet as part of the Arena and other event-space.

Arena Bogotá will feature a number of transcendent features including a state-of-the-art roof the likes of which has never been seen before in Colombia. The roof will be 131 feet high and includes the longest "point-to-point structure" without support in the country, and has the capacity to resist 110 tons, which means that the venue (unlike others) will offer the possibility of allowing for even more production elements and performance equipment, resulting in the largest and most visually spectacular events in Colombia. This unrivaled roof will certainly take acoustics and sound systems to new heights, allowing attendees to experience their favorite singers/music in a whole new way.

Arena Bogotá will have a capacity of 24,000 spectators as part of a strategic design that caters to attendees. Artists, local promoters, and producers will also appreciate some thoughtful touches such as spacious backstage areas / dressing rooms and a storage space of more than 40,000 square feet, allowing for more than 10 trucks to simultaneously load-in (i.e. the largest loading and unloading space of its kind in Latin America). Given the decades of experience that Cardenas has as a promoter of live music events throughout the world, these features are designed to streamline logistics and minimize costs for everyone involved.

"I am very proud to be able to become the entertainment ambassador in my native country, and to be able to welcome everyone to Arena Bogotá, which will be the home to all Colombians, businessmen and promoters, the artists / live music events, business conventions, and sports that our country deserves. For the first year of operations we plan to perform between 130 and 140 shows, which means about three events per week, which will include family events, corporate, live music, sports (e.g. motocross, Olympic sports, indoor soccer, boxing, volleyball, tennis, basketball, etc.), eGaming, parades, and equine events, among others," says Cardenas.

Arena Bogotá's design matches its mission, to provide all spectators with direct lines of sight from any point, with the objective that visitors can thoroughly enjoy the wide range of entertainment that will come from the hand of Cardenas.

With Arena Bogotá, the public will find for the first time in Colombia a roofed space with a distinctive variety of food and drinks, over 2,500 parking spaces, and plenty of restrooms to reduce long lines, among other attractive benefits, as compared to other arenas in the region, creating an enticing venue for many artists who have always wanted to perform in Colombia.

According to Cardenas, there is no space in Latin America comparable to Arena Bogotá, "There are some similarities with Arena Mexico, but even so there is none that has the qualities and grandiosity of Arena Bogotá. As a way to compare the relative size, we can look to the AmericanAirlines Arena in Miami, which includes 17,000 seats, whereas Arena Bogotá will have 24,000. This great space gives us the flexibility to perform events / shows that we otherwise may not have been able to do. In short, the capacity of Arena Bogotá will be three times greater than any other arena that exists in Latin America."

Thanks to Cardenas, Arena Bogotá will be the first cultural and entertainment center to serve Colombia's capital, designed to revolutionize the way Colombia experiences entertainment, music, sports, and art. "It's about time that Colombia had a building that was able to offer more and better shows. In the second half of 2020, we will have access to a dream venue to enjoy shows like Marc Anthony, Carlos Vives, Maluma, Nicky Jam, Bad Bunny, Becky G, Silvestre Dangond, Wisin & Yandel, Ricardo Arjona, Maná, and Romeo Santos, among others, with our family and friends,"added Cardenas.

The size of Arena Bogotá will allow individuals from all socioeconomic status to attend events, democratizing high-level entertainment in the country. Additionally, and given Cardenas' philanthropic vocation, a percentage of Arena Bogotá's profits will go to the Maestro Cares Foundation for the projects it supports in Colombia. Maestro Cares Foundation was founded in 2012 by Cardenas and Marc Anthony with a mission to improve the quality of life of orphaned and disadvantaged children in Latin America and the United States. To date, in Colombia, this foundation has built projects in Barranquilla and Cali, where it directly impacts more than 1,500 children, and plans to expand its reach to other cities in the country.

Additionally, due to its prime location, Arena Bogotá is not confined by early curfews and enjoys the ability to sell and consume alcoholic beverages within the premises.

"I am especially grateful to Guillermo Rincon and Jaime Sanabria for having allowed me to be part of this arena project," concludes Cardenas.

Businessman and philanthropist Henry Cardenas, a pioneer of entertainment and sports in the United States, founded CMN in 2002. What began as a series of small events at churches and universities in the 70's has grown into a multi-million-dollar company with over 60 professional staff in its Chicago and Miami offices.

From the beginning Cardenas recognized the power of a massive event and the call of the masses to the need for events that satisfy the emotions and senses.

Henry Cardenas founded CEMG in 2018 in order to bring his passion-project, Arena Bogotá, to life. CEMG will continue to drive Arena Bogotá forward to fulfill its mission, creating a world-class arena the likes of which does not exist in Latin America.

About the cultural and entertainment center Arena Bogotá Calle 80:

Cultural and Entertainment Center Arena Bogotá Calle 80 is the megaproject being developed by businessmen Guillermo Rincon and Jaime Sanabria, where visitors will be able to enjoy a wide range of shopping, family entertainment, and gastronomy. The premises will include places to relax, ecological paths, and different locations to host events. Arena Bogotá Calle 80, will also be equipped with a shopping center, bars, cinemas, Arena Imagine (a space designed for children), Arena Market, Happy People (a family club that will have ice skating, bowling, swimming pool, gym, billiards, barbershop, and beauty salon), Arena Fest, and Arena Bogotá.